With the backing of the marine sport, leisure and event logistics specialist, Paris Olympic hopeful Klara Wester and her team hope to better their semi-final position of 2020, as they compete with other top female teams for the Nordea Women’s Trophy. 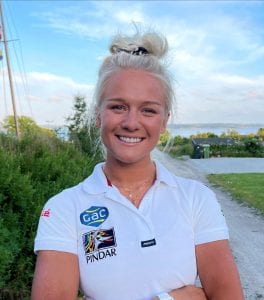 Swedish dinghy sailors Klara Wester and Rebecca Netzler, who compete in the 49erFX class at Olympic level, will be joined by match racers Julia Carlsson and Beata Törneman who ranked fourth in the world in 2019. The fifth team member is Ida Svensson, also part of the Swedish Sailing Team, who normally competes in the Nacra 17 foiling dinghy catamaran.

GAC Pindar’s support for Wester and her team reflects GAC UK’s joining Maritime UK’s Diversity in Maritime Charter this year. The Charter holds its member organisations accountable for closing the diversity gap and making the maritime sector more inclusive and, as such, GAC UK and GAC Pindar are united in their ambition to improve pathways for women sailors.

Herman Jorgensen, GAC UK’s Managing Director, says: “Marstrand is a much-loved competitive sailing venue for the GAC family, so we are very proud we support Klara and her team competing in its flagship event. We are committed to improving diversity in our own organisation, making us match fit for the future, and we consider it our duty to support other areas of industry and sport to do the same.”

Andrew Pindar, founding partner of GAC Pindar, adds: “We are delighted to support Klara and her team competing in this great event. We stand alongside the charity, The Magenta Project, which is also assisting Klara’s venture in Marstrand, and we are united and committed to advancing equal opportunities for women in elite performance sailing.”

Hosted by the Royal Gothenburg Yacht Club (GKSS), and now in its 27th year, Match Cup Marstrand attracts world elite sailors with regular appearances from America’s Cup, Olympic and Sail GP competitors. For the second week in July, the seaside resort becomes the sailing capital of Sweden, enticing audiences and businesses on an annual basis. Fans can follow online as this years’ event adjusts to the impact of the pandemic with local competitors and limited spectators.

The teams will be sailing the Far East 28 one-design yacht from 7th – 10th July.

Follow Klara’s progress on our sailing team blog and on our social pages.