Alicante, Spain, 17 January 2023: Leg one of the 14th edition of The Ocean Race started in Alicante on Sunday, and with it our logistics race began, sending freight for the five IMOCAs, six VO65 yachts, the race organisation and its partners to the next destinations of this world-class event. 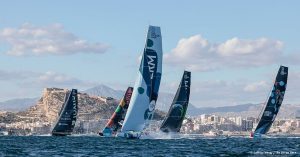 As the two fleets race to Cabo Verde on the first leg of their races with the support of GAC Pindar as Official Logistics Provider, the pack up of Ocean Live Park, Alicante is underway. Around 140,000 people visited the site over the last weekend before closing on Sunday evening. From here, event freight, broadcast equipment and team spares will move to several destinations depending on stakeholder requirements.

The IMOCA fleet is now en-route on Leg One of their epic 32,000 nm Race which will circumnavigate the globe visiting a total of nine cities and finishing in Genova, Italy, in June.  And in a new event, The Ocean Race VO65 Sprint, the VO65 fleet is also racing to Cabo Verde, off the coast of north-west Africa, and will resume the competition in May when the IMOCAs return to Europe.

The Ocean Race is often described as sailing’s toughest team challenge and one of the sport’s big three events, alongside the Olympic Games and America’s Cup. As such, the demands on the competition’s logistics services provider presents a global challenge to ensure timely delivery of all freight.  We are the only logistics services partner appointed by The Ocean Race for three editions in a row, following a successful collaboration in the 2014-15 and 2017-18 editions of the race.

Jeremy Troughton, our General Manager says, “It is an honour to play an important part in this great event for an unprecedented third consecutive term. The Ocean Race never stops evolving and always raises the bar, challenging us as a service provider. It empowers and tests us, both as a global team and as individuals, to deliver the best possible logistics solutions.” 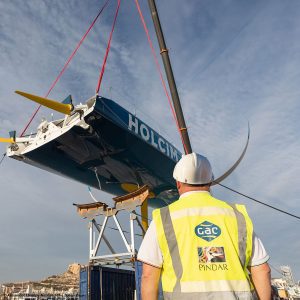 Since our appointment as an official partner to the Race 18 months ago, careful feasibility studies on freight route options were undertaken. As a result, the traditional ‘leap-frogging’ process of moving freight for the event as two identical sets was abandoned. Instead, equipment and spares will move on three key routings with some items moving on their own unique routes. Predominantly, kit will move from Alicante to Itajai, meeting the IMOCA teams after they complete the monstrous 12,750-nautical mile Southern Ocean passage from Cape Town on this, the 50th jubilee anniversary of the Race. Freight is already on-route to Cape Town, the third host city of this edition, with the Ocean Live Park opening on 8th February.

Since the pandemic, we have worked tirelessly to ensure everything was in place for the official opening of the Ocean Live Park next to The Ocean Race’s headquarters. As the Race progresses over the next six months, we will be responsible for tracking and monitoring every shipment to ensure the Race’s time-critical needs are met. In addition to the transportation of Ocean Live Park infrastructure, we will move broadcast and other support equipment between host cities, manage customs clearance, storage and relocation services for urgent spares, site management, on-the-ground staff, and provision of site materials handling equipment. To do this, we will work closely with logistics experts from GAC’s global network of offices to ensure fast and efficient on-the-ground responses to the demands of the world-class event.

Our teams working on-the-ground in the host cities and at our headquarters in Southampton, UK, will be on standby throughout, ready to coordinate recovery logistics services if needed. That standby role is a familiar one for us, as we have provided urgent yacht and mast transport solutions for four teams during the previous two editions of the Race.

In collaboration with the founding partner of its sustainability programme, 11th Hour Racing, The Ocean Race features an ambitious and comprehensive science programme which will see its teams collect more environmental data than any other sporting event in the world, measuring microplastic pollution and gathering information about the impact of climate change on the ocean, and gather data to improve global weather forecasting.

Jeremy Troughton says the core mission for this edition is to reduce the impact on the environment by taking action to eliminate single-use plastics involved in logistics operations: “Not only does that reflect our own corporate commitment, it’s a must when working for The Ocean Race, which proved itself as a sustainable event leader with its award-wining efforts in the 2017-18 edition.”

GAC Pindar will also provide detailed data on greenhouse gas emissions produced through all transport and logistics arranged on behalf of The Ocean Race, its partners and teams.